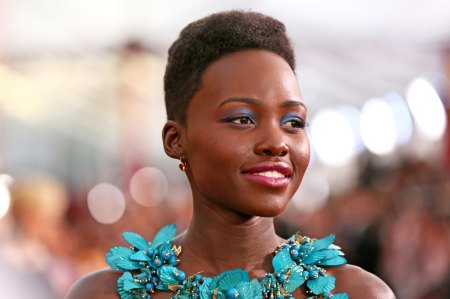 Lupita Nyong’o, a relatively fresh face on the Hollywood scene, has done little to remain unnoticed. But it is not her eccentric fashion choices. Nor her captivating Oscar-winning performance, in her first feature length film ’12 Years a Slave’ that caused ripples. Oh no, it was the tenacity and pride shown in her engaging acceptance speech, at the Black Women in Hollywood Awards.

Her ability to assert her own vibrant character and embrace her ethnicity was resoundingly clear. Especially in an industry which has a set convention for beauty and hails anything that deviates, as foreign.

Within her speech, the eloquent starlet explained the insecurities she had faced, and how her glowing ebony skin had once been the cause of much anxiety. So much so, that she would pray to be fairer, to better resemble the much loved public ‘pioneers’ of beauty. That was until, Alec Wek, prominent Sudanese super model, erupted onto the fashion scene and wore her dark complexion with pride. “It was perplexing” she began “and I wanted to reject it as I had begun to enjoy the seduction of inadequacy”…

For me, as a real woman, not just of colour, but of irregular proportions, blemished skin and victim to the occasional bad hair day, Lupita’s speech resonated completely. The three consecutive words ‘seduction of inadequacy’ had plagued my thoughts and I was unable to shake the ramifications of what they meant.

These powerful words unearthed an emotion I had scarcely thought to explore. Could it be that we as a culture are lulled into believing we are unworthy of the title ‘beautiful‘? Are we barricading ourselves in with self-imposed mental barriers, obstructing any chance of acceptance and self -appreciation? And are we really seduced and comforted by the dull ache of feeling inferior to all those around?

I suppose the real question begs, why is so much prominence placed upon our physical exteriors? The media tells us how to walk, talk and dress in order to be socially accepted, but the truth is so far removed from this. I believe that beauty is not something that can be externally acquired, no matter how much enhancement you use. Beautiful is something you simply have to be. An inner confidence and compassion that radiates from deep within.

‘You can’t eat beauty, it simply doesn’t sustain you.’ this was the final thought left resonating with the awe stricken audience which comprised of fellow inspirational characters such as Oprah Winfrey herself. There is something so effortlessly enchanting about this young women, whose compelling performance far outweighs her need to conform to preconceived standards of unattainable beauty.

I draw so much inspiration from this speech. I derive perspective, encouragement and contentment. Be it the colour of your skin, or the condition, it does not negate your beauty unless you, yourself allow it to.
“You can’t rely on how you look to sustain you. What actually sustains us, what is fundamentally beautiful, is compassion for yourself and for those around you. That kind of beauty enflames the heart and enchants the soul”